A station wagon with racing flair – the Mercedes Benz-AMG C43

Goeppingen, 26.01.2017. New year, new show car – that’s how it goes at least at RaceChip, the market leader in electronic performance enhancement via auxiliary control unit. With the Mercedes Benz AMG C43, the Goeppingen-based experts for chip tuning boxes continue to demonstrate how it’s possible to bring together performance, driving fun and everyday practicality in perfect harmony. The AMG C43 factory model’s 367 hp and 520 Nm performance has been boosted by the RaceChip Ultimate to 435 hp und 634 Nm. Light rims by HRE, Pilot Super Sport tires by Michelin and height-adjustable suspension by KW complete the extremely agile and simultaneously direct driving feel of the new RaceChip show car.

RaceChip installed a RaceChip Ultimate under the hood of the AMG C43 4Matic T and gave its already strong engine power an impressive boost: from a punchy 367 hp to a fantastic 435 hp. The torque makes a jump from 520 Nm to a stellar 634 Nm. The decision to use the AMG C43 as show car wasn’t just due to the great performance enhancement with the RaceChip Ultimate. Dominic Ruopp, CEO of RaceChip, explains why he is already an enthusiastic fan of the car: “There hasn’t been a car in a long time where the interplay of the vehicle and our chip tuning technology has got me so excited. AMG has done brilliant work here and we finalized and refined it with the RaceChip Ultimate. The sound, the responsiveness, the drive and the absolute power of the engine with a RaceChip – generally you only find these in AMG models with the number 63 in the model name”. With performance increases of 68 hp and 114 Nm, the Mercedes-AMG C43 puts on a show and with its V6 biturbo engine, gives its big brother, the AMG C63 with its V8 engine, a run for its money. Yet the RaceChip AMG C43 is not only hot on the heels of its big brother in terms of power and torque, all in all it’s actually a superior package. With the RaceChip Ultimate, the AMG C43’s acceleration out of a standing start is incredible. The acceleration also remains powerful and responsive even at high speeds. These are both driving situations where as a driver you would wish for a little bit more performance in the standard C43. The all-wheel drive, the comfortable adjustable suspension, the precise tuning of the 9-speed automatic transition and the lower fuel consumption all make it a highly practical car for your daily needs. Also if we compare its performance statistics with the new AMG E43, the RaceChip C43 emerges the clear winner. AMG only wrings out 401 hp and 520 Nm out of the E43 with its V6 biturbo engine – 33 hp and 114 Nm less than the C43 with integrated RaceChip Ultimate, which is clearly cruising in the passing lane.

To let the driver really savor the performance level of the show car, RaceChip has also fitted a KW threaded spring kit for a more agile chassis adjustment as well as Michelin Pilot Super Sport tires for the ideal grip and light HRE 19-inch rims (8.5x19 ET47). The C43 cuts an elegant figure in its matte grey and sporty accents. The otherwise very eye-catching RaceChip Orange was integrated discreetly into SchwabenFolia’s car wrap on the sides of the Mercedes T-Modell

So much for the performance upgrade on paper. The AMG was given an opportunity to prove what it actually delivers on the road in the production of RaceChip's new commercial. As test track served, the only for this purpose shut down, streets of Tenerife. The curvy and empty streets provided optimal conditions for testing both the car’s lateral dynamics and its performance at high speeds on the straight. Grins spread quickly across the faces of the crew as filming got started. “The longitudinal and transverse dynamics of the RaceChip Mercedes-AMG C43 are breathtaking. Particularly in the case of the transverse dynamics, the C43 can fully exploit the advantages of the complete package consisting of chassis adjustment, wheel-tire combination and the RaceChip Ultimate. The braking system bites perfectly and controls the car very precisely, which means it’s possible to brake very late going into curves. At the same time, you can take full advantage of the extra performance provided by the Ultimate at the apex of the curve, as the C43 responds to the chip tuning superbly, generating that extra thrust”, reports Dominic Ruopp. The verdict of drivers and crew: A show car that is sporty and spirited and that at the same time remains controllable in all road conditions. The makings of a true star in any case. 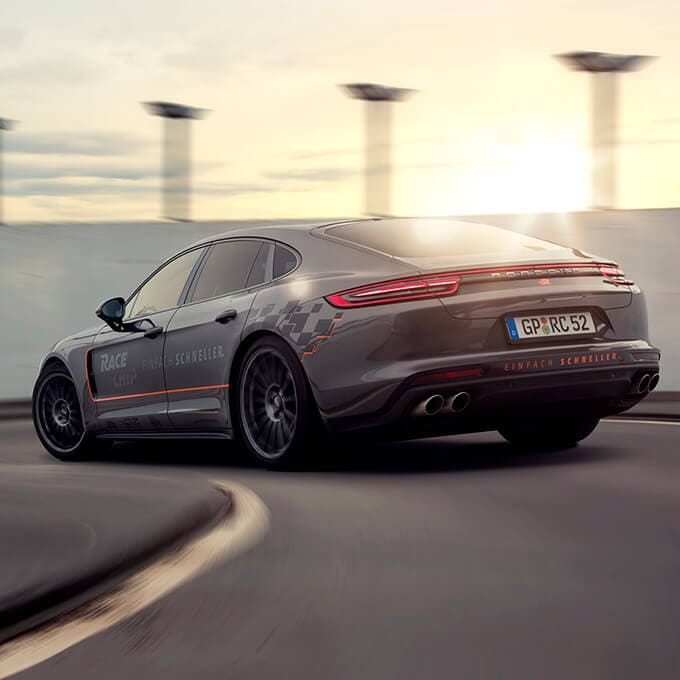 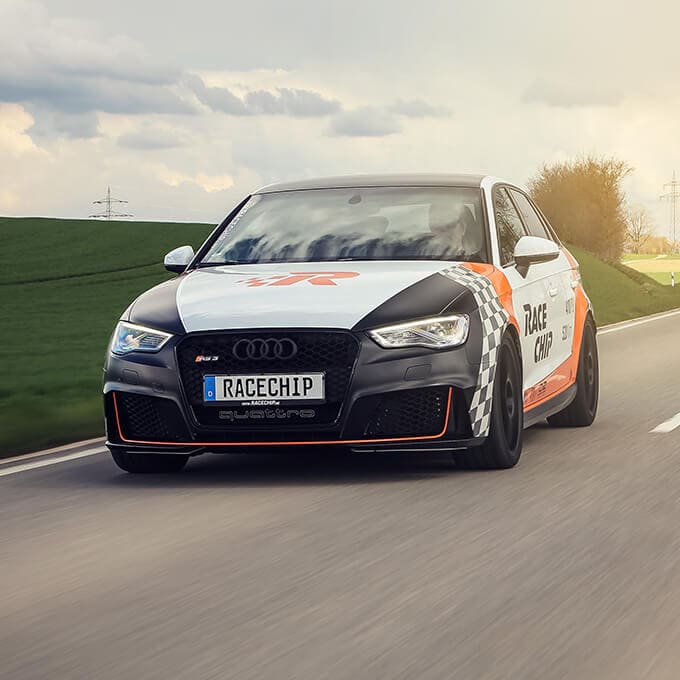 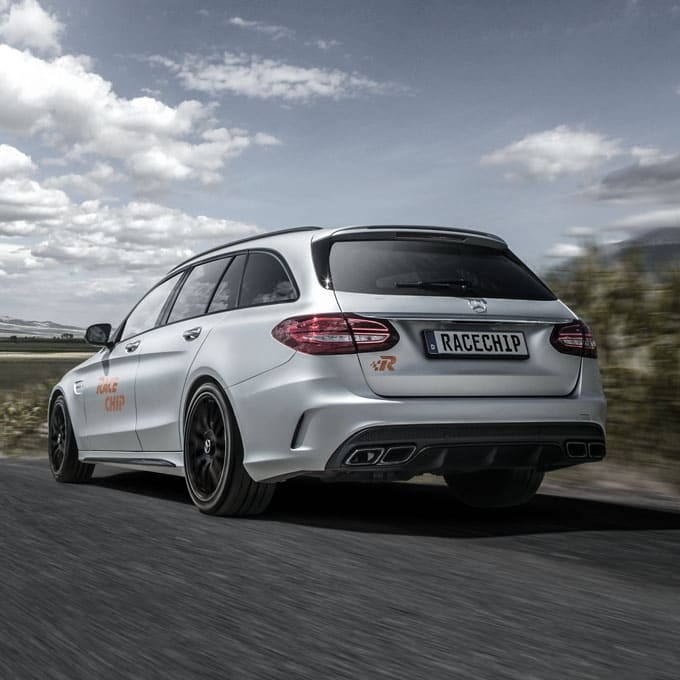